The Building of a Boat

Building submarines isn’t easy nor tidy — even when dealing with models.  Here is one of my projects  to illustrate the intricate steps in creating one of  these boats.

This boat is close to my heart and my home. The CSS Hunley

It takes time and patience, because each piece is custom made and check carefully for historic accuracy.

You can order any boat and it is 100 per cent handmade, truly a “unique” piece of military art and history

I’ve visited this boat several times (it’s housed less than a mile from my home), and I have come away astounded after each visit at the mechanical ingenuity it took to build it during the Civil War.

The boat is ripe with history.

The boat officially is the H. L. Hunley, often referred to as Hunley. It was a submarine of the Confederate States of America and played a small part in the American Civil War. Hunley demonstrated the advantages and the dangers of undersea warfare.

She was the first combat submarine to sink a warship (USS Housatonic), although Hunley was not completely submerged and, following her successful attack, was lost along with her crew before she could return to base. The Confederacy lost 21 crewmen in three sinkings of Hunley during her short career.

She was named for her inventor, Horace Lawson Hunley, shortly after she was taken into government service under the control of the Confederate States Army at Charleston, South Carolina.

She sank again on October 15, 1863, killing all eight of her second crew, including Horace Hunley himself, who was aboard at the time, even though he was not a member of the Confederate military.

Both times Hunley was raised and returned to service. 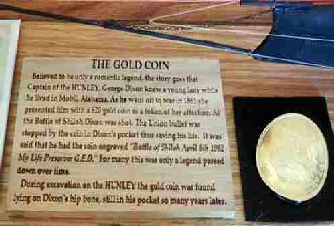 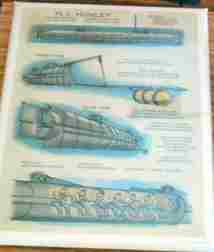 Hunley sank the 1,240-displacement ton United States Navy screw sloop-of-war USS Housatonic, which had been on Union blockade-duty in Charleston's outer harbor. The Hunley did not survive the attack and also sank, taking with her all eight members of her third crew, and was lost.Finally located in 1995, Hunley was raised in 2000 and is on display in North Charleston, South Carolina, at the Warren Lasch Conservation Center on the Cooper River. Examination, in 2012, of recovered Hunley artifacts suggests that the submarine was as close as 20 feet (6 meters) to her target, Housatonic, when her deployed torpedo exploded, which caused the submarine's own loss.