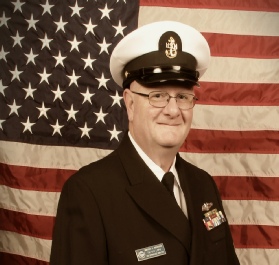 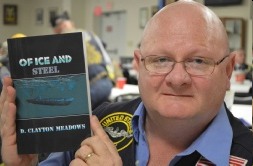 Chief Meadows has published two naval thrillers —  “OF ICE AND STEEL” and “EPITAPH.”

Both are available for purchase at several sources, Amazon, for one, and various book stores.  Most book stores will order them if you ask for D. Clayton Meadows books.

It is autumn 1944. A German submarine makes a daring and dangerous passage into the Arctic ice. Within the U-boat’s steel hull lies, an experiment that if successful will guarantee survival of the Third Reich. Unknown to those onboard events are occurring on the opposite side of the world that will leave them trapped and dying in a frozen hell. In a desperate attempt to save his crew the Captain utilizes the secret cargo that puts his crew in suspended animation. Decades later they awaken to a strange new world. Their only wish is to get home. A new Russian revolution has occurred. The world is on edge, as civil war breaks out in the former Soviet Union. Then during the fighting an American plane is blasted from the sky by Russian missiles. As nations draw their battle lines the world economy withers. A spark is all that will be needed to ignite a total nuclear war. It is now that the U-boat makes her run for home. Confronted by warships, and having no idea the war ended more than a half century ago, the U-boat defends herself. Then other ships begin to disappear. Russia and the United States blame each other as one more step toward war is taken. One man though finds the answer. At the last moment his fantastic story is believed and the two sides agree to each send a submarine to find the U-boat and force her to surrender or send her to the bottom. Can three men from different times, cultures and backgrounds, overcome fear hate and their own demons to save the world?

A Son of the Sea

Chief Petty Officer D. Clayton Meadows (Ret.) is a Son of the Sea. As a toddler, he sought water.  As a young man in college, he felt the call of the sea and enlisted in the U.S. Navy, attaining the rating of Chief Petty Officer while serving aboard the Dallas, SSN 700.  He served 18 years in The United States Submarine Service.

Now retired, he still seeks all things Navy and salt water.  An artist of world renown, he is kept busy making unique objects that are treasured by people--the mariner, the common person and, yes, even high government leaders -- including three presidents, Carter, Reagan and George H.W Bush.

Tour this site. See for yourself the talents of this veteran and, perhaps, claim for yourself one or more of his fantastic creations -- each, one of a kind. 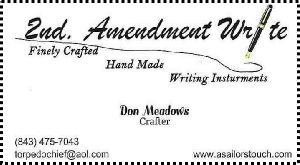 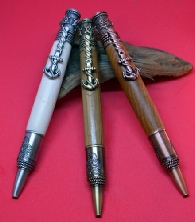 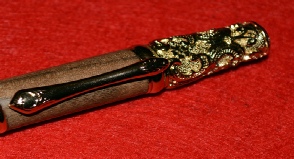 She accomplished her mission: Showing a President of the United States what she would look like and how she would fight.  Then, her “port” became the basement of the Naval Museum in Washington, D. C., And, there she moored, unnoticed, nearly forgotten. Thankfully, someone did notice her, and knew her story and the unique history she had made.  No one knows who, but she was rescued and somehow found her way to the After Battery Submarine Club in Charleston, S.C.  The club wanted to restore her  to active duty, and commissioned TMC/SS Don Medows to do the work. He got her in March 2018 for a complete overhall.  After 900 hours of work, she was declared “ready for duty “ and returned to the ABSC. Now, she serves as an exciting testimony of the technology, personnel and history that enabled the real Ethan Allen to launch the first, and only, nuclear-powered, ‘boomer’ to fire a nuclear warhead from below the surface in the middle Pacific. As planned the missile exploded, sending the United States to the lead in the dangerous Cold War of the 50-70s.  For additional information, CLICK HERE.

Please Read: I take great pride in my work. My models are made from scratch, no “store-bought” stuff is used.  The details are as accurate as I can make them, resulting from much research and selection of material.  This isn’t easy nor done quickly. Each product you get from me is a one-of-a-kind work. So, when you order from me, please understand that you can be justifiably proud.  If you want “quick”, please shop elsewhere.  I have gotten complaints from other craftsmen that my prices are too low.  That’s their problem, but I want my shipmates and customers to have quality products, and I believe my prices enable this. Where there is a legitimate complaint about a project I have done, I will go the extra mile to make it right. I thank you for your trust, loyalty, patience and friendship.  These are my greatest rewards. – Chief Don.

We now are featuring new pen designs: The Robert E. Lee and the U.S. Grant pen set and the Shadow pen.

A shadow box can be a bit large to carry around. However, not one veteran out there can deny the impact of a display of what we did in the Military.

It impresses other vets and captivates those who never served under the Nation’s Colors.. From starting a conversation to outright intimidation, emblems of one’s service can be the tool that gets us into good situations.  It also can be a restraint for those who might be planning a bad situation for us.

I present the Shadow Pen! (Above)

Ship's crests – or any other graphic or picture – are encased in solid clear resin, turned and polished in a 9-hour process. The top of this unique twist pen is made of submarine battery well wood. Alabaster, Chrome and Solid Silver encase a solid brass twist mechanism for a lifetime of use. The pen uses CROSS Brand refills.

It takes approximately 15 hours to create this beauty from start to finish. And you can have it made just like you want for $180.

You Civil War students will relish the addition of the Grant-Lee Set (details here). As with all of Chief Don’s pens, these are made from scratch, one at a time.

Author: ICE AND STEEL and EPITAPH

The Pen: Ally to History

Perhaps no other invention has documented the fate of man more than the pen.

This simple instrument had been used to declare wars, agree to peace, record history, made possible home loans, distributed medicines, been the means of communication with loved ones oceans away.

Since the use of the pen has been vital to our culture, should not the pen you own or give represent the power it wields?

My pens don't just write, they tell a story, a story that cannot be duplicated.

Each work uses wood with a history. I use Olive wood from Bethlehem, Oak from Jack Daniel’s Whiskey barrel's, Maple from US Navy nuclear submarines, Koa from the big island of Hawaii, Blood Wood from South America, and many others

These woods combined with the finest metal — Gold, Chrome, Pewter, Antique Brass and Copper -– form an heirloom to be cherished and handed down over generations.

From Nautical scrimshawed pens to Bolt Action Rifle Pens, from Civil war bullet pens to majestic pens of the Victorian era, these works of art are unlike anything offered anywhere.

Get only and give only the finest. Using a finely crafted writing instrument tells everyone you are in a class all your own, giving a one of kind pen puts you in a class above. – D. Clayton Meadows,

Author of OF ICE AND STEEL and  EPITAPH